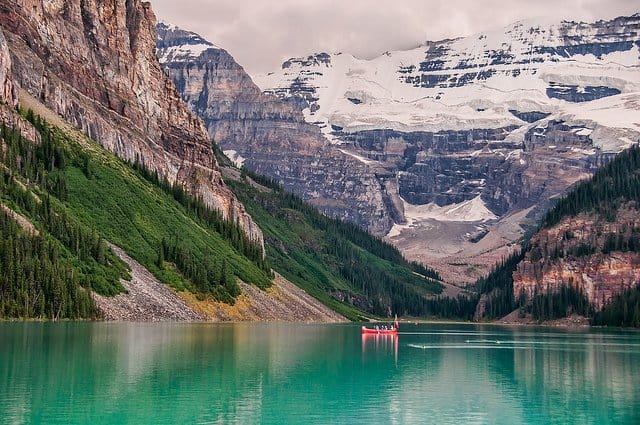 Most beautiful places to visit in Canada

Canada is the second-largest country in the world with a vast array of natural wonders, so any attempt to make a list of places in a country known for its sheer beauty will always be a tall order. Everyone will have their own ideas of the best places to take vacations in Canada, but here is mine to get you started… While the entire Rockies stretch through the USA as well, when it comes to jaw-dropping scenery its northern neighbour comes up trumps, whether it’s for hiking in the summer or skiing in the winter. Comprising 5 National Parks (Banff, Glacier, Jasper, Kootenay and Yoho) this area should be near the top of any bucket list. The Rocky Mountaineer is the train of choice for many honeymooners, and it’s easy to see why – glass-topped carriages giving superlative views onto glaciers, towering mountain peaks, waterfalls, canyons and lakes so blue you’ll think your eyes have been Photoshopped.

Vancouver Island and the Johnstone Strait

Surfers love the wild, epic waves here (though with a nickname of “Graveyard of the Pacific” the west coast should be approached with caution), and animal lovers come to spot orcas in the waters of the Johnstone Strait. If you prefer something more sedate to all that excitement, you can relax with something quintessentially British (well, you are in British Columbia, after all!) – afternoon tea at the Empress Hotel, Victoria.

Lake Louise is located in the Rockies but deserves a special mention of its own. You’ve seen the photos – with water almost impossibly turquoise (the result of minerals in the rock that flow into the lake after glacial erosion) – now it’s time to see the lake for yourself and get a picture of your own. This isn’t the place to get away from it all – and certainly won’t be able to get away from thousands of other tourists – but some places are popular for good reason, and deserve to be visited anyway. To fans of seeing animals in their natural environment, this place is no longer a secret – it’s marketed as the “Polar Bear Capital of the World” and it more than lives up to its name (I saw about 40 of them in one day on a recent trip – although you might want to check your traveller’s insurance before you go!). While it is already the premier destination for seeing these beautiful white bears, not everyone realises that in late summer is also a fantastic place to see Beluga whales. Add to that the opportunity, if you’re lucky, to see the Northern Lights in deep of winter and to see colourful wildflowers in June-August, and it means this tiny town of around 1000 people has something to offer year-round.

On the trail of the Titanic in Nova Scotia Despite visiting during a snowy blizzard, I still enjoyed my time in Halifax. Partly because I always wanted to say I’d been to Nova Scotia, but also because there is a wealth of history there. Due to blanket snow, I couldn’t visit the “Titanic Graveyard”, so-called as many of the fateful boat’s passengers are buried here. Pier 21, known as Canada’s equivalent to the USA’s Ellis Island, was the “Gateway to Canada” for thousands of immigrants from ocean liners from 1928-1971, and is now one of Canada’s most important museums. Halifax also makes a good jumping-off point for drives further afield to Prince Edward Island or Cape Breton. Angel Falls may be higher, and Victoria Falls may be wider but Niagara still holds the crown of the world’s most famous waterfall. It provided the backdrop for one of Marilyn Monroe’s better films, has hosted countless weddings and honeymooning couples, and daredevils from across the globe have come to test themselves against the might of mother nature, either by crossing on a tightrope or throwing themselves over the edge in a Barrell. Thankfully there are safer ways to enjoy the falls, namely the Maid of the Mist boat (tip: it’s worth letting people past you so that you’re at the front of the queue if you want to make sure you’re first into one of the wettest spots on the boat). Everyone has their own opinion of which side is better (Canadian vs American) but as you may only visit once I’d suggest seeing it from both! Even the most committed nature seeker will find themselves in a city at some point, so embrace all that urban life has to offer in Toronto. My first impression was that it seemed like a smaller, cleaner, tidier version of New York. The views from the CN Tower (which held the title of world’s tallest freestanding structure for over 30 years) are as incredible as you’d imagine, while the Royal Ontario Museum is the best single summary of Canada’s cultural life and history. For something really unusual, check out the Cineforum (where local eccentric Reg Hartt will essentially show you short films and animations in his living room, and maybe talk about LSD…), while the historic Distillery District is alive with cafes, art galleries and idiosyncratic shops. And finally, take a walk up to the Gothic Revival stately home Casa Loma – in equal parts fascinating, quirky and tragic.

The Bay of Fundy Almost as world-famous as some of the other places on this list, and easily as spectacular, kayakers and canoers come from all over the world to paddle through the jaw-dropping scenery and the planet’s highest tides. The unique geography of the area also means that whale watching here is an essential experience – you might see humpback, fin, right whales or even blue whales.

In the French-speaking province of Quebec, while Montreal is a fantastic city for many reasons and little Quebec City may be a victim of its own success in terms of popularity, it’s still a must-visit destination. The world’s most photographed hotel is in the centre of town, North America’s only Ice Hotel is around 30 minutes away, and around every corner is a glimpse into another quaint side street or romantic cafe, making this 400-year-old city wonderful to explore on foot. When you’re done with walking around the oldest city in North America and ticked the polar bears off your wildlife list, head properly up north in search of the Aurora Borealis, aka the Northern Lights. As a natural phenomenon, you’re never guaranteed to see them, but Yellowknife in the Northwest Territories is a great place to try. Just remember to wrap up warm!

To get one of the greatest glimpses into such a vast, sprawling country, how about going coast to coast, from Atlantic to Pacific? Taking a drive across the Trans-Canada Highway or a ride on the Canadian (a 1950s train journeying from Toronto to Vancouver over the course of 3-4 days), is something that few people experience in a single trip, but any who do so will remember for the rest of their lives.

Where to stay in Canada

Apply for Nonimmigrant Visas to the U.S.

The Most Beautiful Places in Canada